Since the white tea is made-up with the most unfermented tea leaves. So you have to pluck the leaves at the right time carefully. The best time can either after the plant blossom or about to next opens. Hence, the taste and caffeine in white tea vary based upon several factors that include:

Indeed, whit tea is one of the types of tea that has indulged with a delicate flavor. Though caffeine in white tea has naturally low consistency makes it ideal for people who want to enjoy a fresh cup of tea with little caffeine. Interestingly, white tea has harvested during the start of the season.

During this time, the white tea plants comprised of new leaves and buds. Hence the name of the white tea has derived from the white fuzz, which is a part of young leaves. This white fuzz helps the leaves by protecting the plant of tea from insects. Moreover, this tea plant should be hand-harvested each year within a short time. However, white is relatively expensive than other types of tea.

What is White Tea?

Since the white tea is composed of numerous young tea leaves of springtime, traditionally, they are grown in the province of China. The dried tea leaves of the plant known for their withered small buds and leaves that slightly looks fuzzy. So when you brewed the white tea leaves, they typically turn into a light gold color and have some floral aroma. Hence, based upon the type of white tea you are using, you might have a flavor that can vary between sweet floral aromas to wood along with light color texture and fruity notes. Though, when you fully brewed the white tea, you might taste bitter and assertive more than black tea.

Almost all types of teas such as oolong, black, white, and green have derived from the same plant origin, Camellia Sinensis, or tea plants. There is a wide range of properties exhibited by these types of teas. Hence, these types of drinks, the way you harvested and dried the leaves will explain the plant’s origin and where they grow. However, typically white tea leaves are harvested during mid-March and early April at Fujian, China.

The moment when the white tea has adequately harvested, the white tea leaves then withered and dried immediately. To dry the harvested white tea leaves, one might use natural sunlight, drying chamber, or heat vents. The drying process helps in preventing oxidization and also give the tea fresh light color and flavor. Also, this will preserve the antioxidants and some other prized benefits of the tea. Though, depending upon the region of origin, the characteristics of white tea can vary.

According to recent research, it has shown that consuming white tea can provide a healthy immune system by giving it a real boost. Interestingly, this white tea can kill viruses and bacteria that can cause disease within the body, such as pneumonia and Streptococcus infections.

Excitingly, white tea can help in protecting you against colon cancer. Through numerous research on genetically predisposed mice were injected with white tea. From the standard prescription drugs, the studies observe the production of colon polyps developed in the mice.

Hence caffeine in white tea contains the lowest-processed among all other tea types, making it an optimal that includes the maximum amount of natural health benefits. Moreover, these white teas are far better and can preserve for longer. Furthermore, white tea also contains an abundant amount of polyphenols. The polyphenols help in aiding the blood pressure and cholesterol by significantly lowering it down.

Typically, caffeine in white tea can consume through hot and freshly brewed. Due to the subtle flavors in white tea, you don’t have to add any extra sweetness and milk into it. Often, this tea has served with light snacks or on its own. The perfect way to fully enjoy and appreciate the delicate, hot tea flavors of white tea is either in the morning or afternoon.

How to Drink White Tea?

The best way to drink white tea is to brew your white tea at a relatively low temperature. The low-temperature brewing process can sustain the new characteristics of white tea. To make delicate white tea, you must use pure, clean (non-distilled) water, which is nearly close to boiling. For an ideal state, one can heat it around 175 to 190 degrees Fahrenheit.

Notably, at 212 degrees Fahrenheit, the water starts boiling. Hence it is essential to simmer the water before it touches to boiling temperature carefully. Generally, many white tea leaves require low steep time, i.e., one minute or up to five minutes. However, if you steep your white tea, some of the white tea variants you might encounter with a bitter and astringent taste. A similar bitter taste situation will occur if you brewed your white tea leaves with boiling water.

Depending upon the leaves, you might determine the amount of tea you need to drink. Hence, if the mixture of leaves is a combination of compact buds, then a little teaspoon for your regular 8-ounce cup will be sufficient. However, if your using light-weight, loose white tea leaves for your tea, then you might require a bowl of a tablespoon. To taste the freshness of your drink before adding any extra ingredient such as sugar or other. Though we are sure, you don’t need any other element.

Does White Tea Have Caffeine? 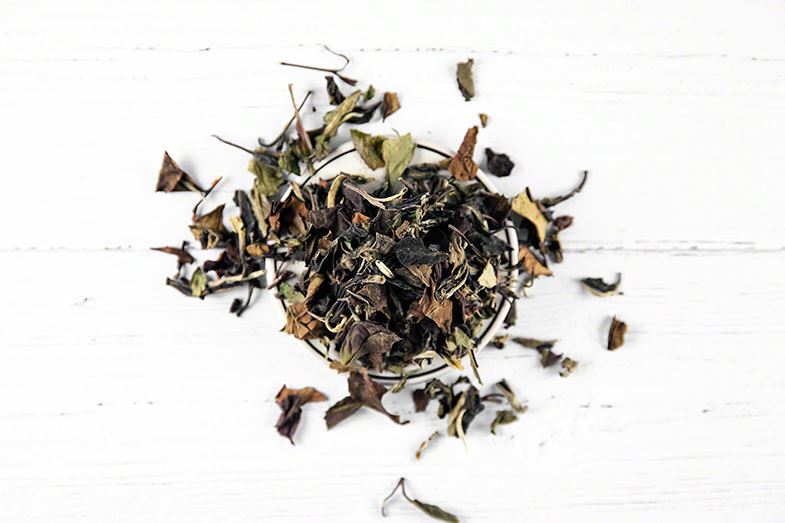 However, how much caffeine in white tea? Though, if you are making your white tea by appropriately brewing it at low temperature and steeping it for a short period, then your regular cup of eight-ounce white tea has six milligrams of caffeine. This amount of caffeine in white tea is meager as compared to caffeine in coffee, which has 80 to 200 mg per cup. Also, due to the lack of oxidation, low caffeine, and short brew time in white tea, they have low acidity than coffee and black tea.

In Darjeeling, few types of white teas are growing and harvesting. Also, in India and other countries, there is a rapid growth of white tea. And contributing their part and becoming tea-origins around the globe. However, white tea is quite different from its conventional counterpart. Hence the white teas that harvested outside China and may have a high level of caffeine since white tea caffeine among these harvested white tea leaves have the same caffeine level similar to green tea and black tea that contains caffeine up to 75 mg per regular cup.

Roughly, there are four significant factors in deciding white tea caffeine content. Since these factors have a considerable impact:

Process of the leaves: instead of steaming the white tea leaves. It is better to roast the leaves. This roasting process will stop the oxidation process and leads to a low caffeine level.

Age of the white tea leaves: Tea that is made-up from the combination of young leaves and buds contains a higher amount of caffeine content rather than white tea, which is made-up of the mature leaves. Though, mostly white tea has made-up from young and fresh leaves and buds. Also, it is important to pluck the leaves with more protection as caffeine has natural insecticides, and younger leaves might contains vulnerable to insects.

The brewing process of white tea leaves: while steeping or using more tea leaves, then required may cause more increase in the caffeine content. The results of brewing caffeine for a long time can turn low caffeine into a high amount of caffeine content, along with a bitter taste.

Variety of white tea plants: By using any type of white tea that is made up of a variety of plants, it might encounter you through varied caffeine content. Furthermore, some of the types of tea leaves determine the specific regions. This variation in tea from certain areas might leads you to increase or decrease the caffeine on average.

How Much Caffeine in White Tea?

The tea that has made with young fresh leaves, certainly have more caffeine. Additionally, the caffeine leaves were steamed and not roasted. Some examples of these tea leaves contain:

The small amount of white tea caffeine contains mature leaves, and even the leaves that have roasted might contain low caffeine content. Some of the white teas that contain little caffeine include:

Interestingly, white tea can be found and sold as tea bags, whole tea leaves, or occasionally bottled in iced tea. You can either have a blend of single-origin teas. However, one can have the highest tea quality in the form of whole tea leaves.

Moreover, to store the white tea, one must use the airtight container and place the white tea leaves in cool and dry places while keeping it away from direct light. If you carefully follow the instructions on adequately storing the unflavored white tea leaves, then you might enjoy the fruitful essence and good quality taste of your white tea for a year or two. However, flavored white teas that contain some added ingredients such as vanilla and citrus will last long for six months till a year, if properly store them under the specified conditions. Though even after a year ago, the flavored tea might lose its stale taste and flavor, it still won’t go too bad state. 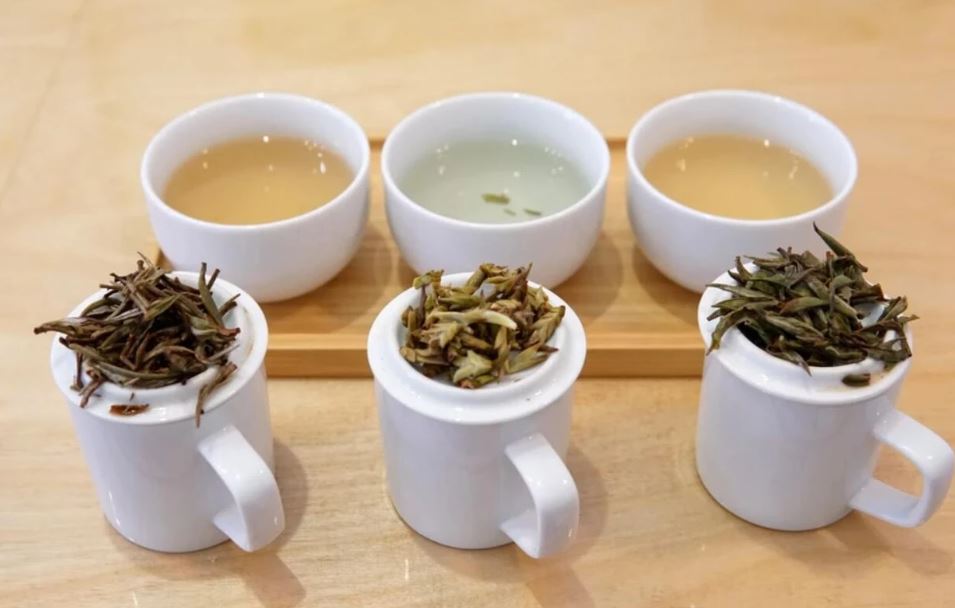 Typically, white tea has some wide varieties that are available for the people to purchase them from the market, shops, and online stores. Here is the list of best white tea recommendations for you:

Yes, naturally, white tea contains caffeine, and it is caffeinated until the package explicitly says decaf.

2. Which tea has the least amount of caffeine?

Typically, white tea has the least amount of caffeine out of all the available teas

3. How much caffeine in white tea?

There is roughly around 15 mg to 30 mg of caffeine per eight-ounce of white tea serving.

4. Is white tea the healthiest among all types of tea?

Yes, white tea is one of the healthiest beverages among all other types of teas, such as (black, green, and red). Because these white teas have the highest level of antioxidants and also this tea is the least processed tea among rest. These characteristics make white tea as healthiest of them all.

5. How many cups of tea should you drink a day?

For an average person who wants to take tea daily, it is recommended to consume up to three or four regular cups per day. This amount will maintain their daily caffeine intake.

How Much Caffeine in Black Tea – A Black Tea Guide