The moment you feel low in energy level, you think to grab energy can such as Monster Energy drink rather than coffee for an extra boost. But have you ever imagined how much caffeine is there in Monster energy drink?

Many people, especially teenagers, are relying on energy drinks and coffee to complete their daily tasks. For them, these caffeinated beverages help them to boost their energy level and keep them active during their daily activities. Regardless of the fact of how much everyone is consuming sugar and putting caffeine in your body, people are still drinking these beverages at a high level daily.

However, how much caffeine considered too much? Hence, according to Mayo Clinic, the cap of taking caffeine per day should not exceed 400 mg/day. So if you are taking the amount of caffeine higher than required, then you are under the high risk of extreme health issues such as headaches, nervousness, fast heartbeat, insomnia, restlessness, and upset stomach.

Although the side effects of caffeine are severe, you cannot neglect the aroma and enjoyment you have when you sip your favorite energy drink. Also, the energy and sweetness you feel in your system is always a super feature. So, the moment you hit yourself to the market store, you must take care of the amount you are consuming in your energy drink. This extra care will help you in understanding the amount you can ingest each day.

Amount Of Caffeine In Energy Drinks 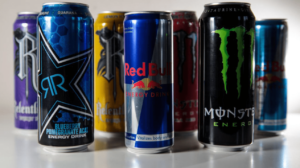 According to the research, these five products out of 16 have 20% above caffeine than the amount mentioned in the label.

Furthermore, during the research, the samples of “Archer Farms Energy Drink Juice” have 70% of the caffeine below the labeled caffeine amount.

The amount of caffeine level per serving in energy drinks varies between 6 mg to 242 mg. However, a few serving beverages have more than one serving. Interestingly, it found in research that the highest level of caffeine founded in “5-hour Energy Extra Strength,” and the lowest level can also be seemingly in oxymoronic “5-Hour Energy Decaf” energy drink. According to the company, they design this drink for the people who want to limit caffeine without losing any nutrients. These nutrients help them in providing the super energy boost with the sustained nerve feeling of alertness.

How Much Caffeine Is In Monster?

Typically, they have almost 20 mg less caffeine per can, then classic Monster Energy of 16 ounces can. On the contrary, if you want to give your energy level a buzz or booster start or you want to have more caffeine, then you can grab a can of “Monster Mean Bean Java Monster.” This Monster energy can give you a refreshing energy boost with the caffeine amount of 188 mg.

If you are one of those energy drink addicts that can’t imagine their lives without caffeine intake through energy drinks, especially your favorite Monster Energy drink, then you must take good care of your per-day caffeine consumption. As we know, taking caffeine more than 400 mg per day can make your health to the high alerts and risks.

Keep on the track of how much caffeine is in Monster is essential as only a can of Monster energy drink contains almost half of the recommended daily intake caffeine. Since many of the food items have natural caffeine in them, it is important to consume your Monster Energy drink at a safe and moderate level.

According to the research by the US Department of Agriculture (USDA), a one-ounce serving of dark chocolate has almost 12 mg of caffeine. So if you consume your energy drink along with other caffeinated products, then you are putting yourself at risk. Hence, it is necessarily important to keep track of other caffeine sources you consume daily.

How Much Caffeine In Monster Energy Drink Products 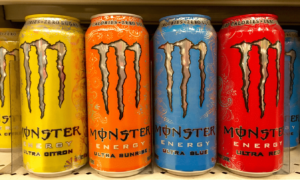 Following is the list of all the Monster products shipped globally (over 40 countries). Furthermore, the list contains the amount of caffeine contained per can: 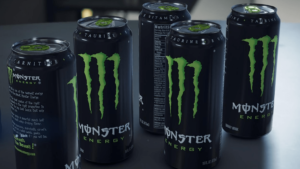 On a bigger picture without getting deeper, when you pick up your Monster energy drink, you can only want to boost your energy. It might also look like a horrible unhealthy option at first glance. However, when you get a little closer and read the labels that provide information for 8 ounces, half of the full can. If you think thoroughly that most people consume full can at a time, then this canned labeling could be misleading. So, before dropping your hands on 16-ounce Monster, can it’s a good idea to read out all the nutritional content mentioned in the label.

As we already know, the caffeine content is highly present in Monster energy drink. This energy drink also has 54 carbohydrates. These carbs are from the added sugar that has used during energy drink preparation. However, according to the 2015-2020 Guidelines for Americans, to maintain optimal health, the adults from 19 to older should not consume carbs more than 130 grams per day. Furthermore, according to the study conducted by American Health Association, an adult woman should not consume more than 100 calories or (25 mg of sugar) per day, and men shouldn’t allow consuming more than 150 calories or (38 grams).

Generally, a can of Monster Energy drink has relatively 1/3rd of the number of overall carbohydrates. Also, double in sugar amount recommended for women. So, this fact can make you re-think when you are about to choose your favorite beverage.

Additionally, in a 16 ounce can contain 200% of the daily vitamin B6 recommendations. Similar to the many nutritional supplements, the consumption quantity of B6 vitamins depends upon your age factor. Hence, according to the research by the National Institute of Health Office of Dietary Supplements, the 19-year-old adults and above must take vitamin B6 between 1.3 to 1.5 mg per day. Also, pregnant women and teens need 2 mg of vitamin B6 per day.

According to another research by the National Institute of Health Office of Dietary Supplements, taking vitamin B6 more than 80 to 100 mg per day for a more extended period in a year can result in severe damage. These health damages can cause skin damage or even skin discomfort, and much more. For your safety and concern, to reach this level of damage, the person is required to drink around 10 Monster Energy drinks in a day. But it’s essential to keep in mind the consumption of Vitamin B6 supplements while drinking your Monster drink or any food that enriched with such nutrients.

How Much Caffeine Is In Monster vs. Red Bull:

How Much Caffeine Is In Monster vs. Coffee:

While comparing the caffeine in Monster and coffee, we have studied that an 8-ounce coffee cup roughly contains 95 – 200 mg of caffeine (Read more about caffeine in coffee: Here). Also, most importantly, unlike energy drinks, the coffee long or black doesn’t contain any sort of added sugar or carb. So regardless of the fact, energy drinks can revive your energy and give it a big boost, nutritionally, it’s going to be the best thing if you still hand with the classic cup of Joe.

How Much Caffeine Is In Monster Zero or Absolute Zero: 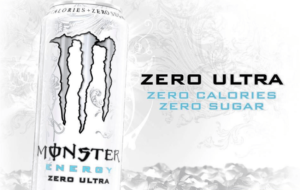 As by the product name, the Monster Zero or absolute zero is an energy drink from Monster Energy that has zero calories. However, this product has a different blend, then the classic Monster energy drink. This energy drink has 140 mg of caffeine, which is 20 mg less than the classic one.

The Monster Company promoted the Absolute zero as a better flavor with a better artificial sweetener tasting blend as compared to their Monster Lo-Carb (their original sugar-free drink).

1. Which three energy drinks have the most caffeine?

These are the top three energy drinks that have the most caffeine:

2. How much caffeine is in Monster energy drink as compared to coffee?

Coffee has more caffeine than Monster energy drinks. In other words, a typical cup of filter coffee has 18 mg of caffeine, whereas a regular can of Monster Energy drink has 100 mg of caffeine.

3. How much caffeine is present in each energy drink?

The amount of caffeine level per serving in energy drinks varies between 6 mg to 242 mg. However, a few serving beverages have more than one serving.

There is no hard fact about as this chain doesn’t report the amount of caffeine, but it has calculated that 12 ounce of Red Bull contains 109 mg of caffeine.

These are the few energy drinks that named as healthiest:

Tags: Caffeine in monsterHow Much Caffeine In Monster
Previous Post

Truth behind Caffeine in Chocolate Buzz

The Pros And Cons Of Caffeine Consumption – Caffeine Buff

The Pros And Cons Of Caffeine Consumption - Caffeine Buff