Truth behind Caffeine in Chocolate Buzz

Chocolate a sweet treat, often associated with mood or energy booster. Though this treat bar has a decent amount of caffeine, how much caffeine in chocolate cause toss and turn at night?

We already knew the fact that those yummy chocolate bars have some pretty substantial health benefits. Most of the time, we satisfy ourselves with numerous benefits of chocolate when we are breaking into late-night chocolate cravings, especially at 10:00 p.m. However, we cannot neglect the truth that this sweet stuff contains a very decent amount of caffeine. So are we crushing our chance of getting a night of good peaceful sleep by hunching on the chocolate munching right before bed? Does the chocolate caffeine cause trouble during rest?

Today, we will take you to the guide that will help you in laying the foundation consuming safe caffeine by explaining the amount of caffeine present in your favorite chocolate treats. Moreover, we will discuss these following queries in detail:

Does Chocolate Have Caffeine In It? 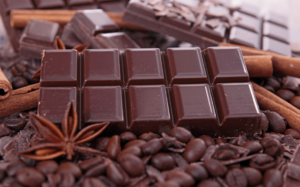 Chocolate sometimes named as a substitute for the booster that quickly fixes your energy or mood. The chocolate has derived from seeds that can found in fruits of cacao trees. Geographically, one can find these trees near the equator. Generally, these seeds termed cocoa beans.

During the chocolate-making process, the cocoa beans were removed carefully from their shells. Afterward, these beans were fermented, then dried. At the end of this process, these dried beans were liquefied. In addition to other substances, one can find a small amount of caffeine in it. The combination of different elements and caffeine in chocolate help many people to evaluate their energy or mood level.

Ingredients like sugar, lecithin, and vanilla can be found in chocolate products while preparing it at the commercial level.

Related Article: 9 Caffeine Facts You Must Know If You Are A Caffeine Buff!

How Much Caffeine In Chocolate?

Before heading down more deeply on the topic of caffeine in chocolate, keep in mind that a standard cup of chocolate has around 150 mg of caffeine.

The Standard Amount Of Caffeine In Chocolate Foods/Beverages:

According to the information presented by the United States Department of Agriculture (USDA) Food Composition Database, these are the following standard amount of caffeine in Chocolate food/beverage:

Is Caffeine In Chocolate Dangerous? 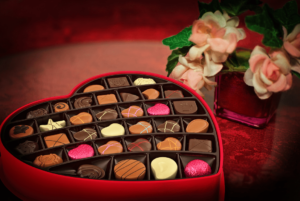 One can quickly push the daily intake limit of caffeine by consuming the many caffeinated beverages as well as directly eating dark chocolate in a day. Consuming caffeine more than required is not recommended, as it can lead to severe health issues. As suggested by Mayo Clinic, the daily intake of caffeine for most adults should be less than 400 mg. Higher intake of this natural stimulant can cause significant side effects such as migraine headaches, insomnia, jitteriness, or can increase heart rate. Additionally, caffeine also interferes with different herbal and medication supplements.

Read More: Caffeine and Anxiety: The Struggle is Real

Does The Caffeine In Dark Chocolate Is Higher Than Regular Chocolate?

If we go with picking up the trend, then yes, the caffeine in dark chocolate is higher than that of regular chocolate. Interestingly, the darker the chocolate, the more caffeine it will contain. Although dark chocolate has more nutrients benefits, then the rest of the other types of chocolates but consuming dark chocolate at night won’t be a good idea.

After the cocoa beans liquefied during the last process of preparing chocolate, the resulting liquid consists of cocoa solids and butter. Both ingredients make chocolate. Apart from cocoa butter in coffee, the amount of caffeine can only found in cocoa solids. However, this caffeine amount might vary from different types of chocolates.

Caffeine In Dark Chocolate vs. In Caffeinated Drinks 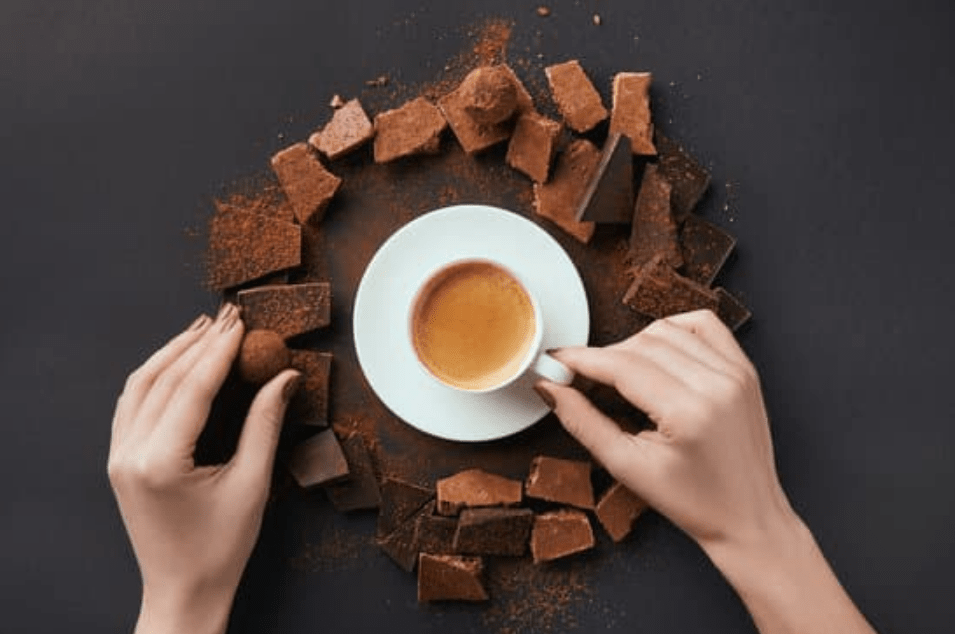 If you are consuming caffeine that is under control, then having a square of high cocoa chocolate is a good idea. Surely, dark chocolate can fit in your daily diet that eventually gives multiple health benefits.

The dark chocolate contains a high content of flavanols. Phytonutrients support healthy blood pressure, and also the flow that might decrease the risk of your heart disease.

According to the research study conducted by Frontiers in Immunology in 2017, the consumption of dark chocolate can help regulate the gut flora and inflammatory digestive diseases. Moreover, it improvises cognition among an individual along with neurological disorders such as dementia.

Each dark chocolate serving contains a decent amount of a mix of minerals. It includes magnesium, iron, and copper. For muscle concentration, the magnesium is beneficial and iron to transport oxygen within the body, while copper and magnesium have so many benefits on the enzymes of everyone’s body.

One must learn to keep moderation while eating dark chocolate. In addition to beneficial nutrients, about 1/3rd of the chocolate bar efficiently delivers 170 calories, and 7 out of 12 grams of fat are saturated. Most importantly, try not to buy dark chocolates with extra ingredients that will boost fat content and calories. You can have more health benefits by avoiding the temptation of dark chocolate with other added elements and stick to high-cocoa bars that are pure and low in sugar.

How Much Caffeine In Hot Chocolate Is Consumable?

Although, several people think hot chocolate as one of the best options to sooth the winter. With this relaxing winter beverage. It always works as your afternoon pick-me-up drink.

A cup of hot chocolate has made up of cocoa mix, i.e., cocoa butter and cocoa solids have less caffeinated consumption. Take the Swiss Miss as an example; the one pack of the standard hot chocolate mix can make up to 6 ounces of the hot chocolate cup and contains relatively 5 mg of caffeine.

How Much Caffeine In Hot Chocolate As Compared To Other Chocolate Drinks? 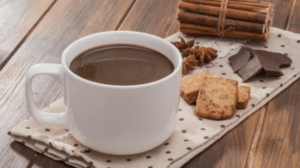 Chocolate has made up of cocoa beans that contain caffeine. So any product made out of chocolate must have a guaranteed to include few measures of caffeine.

The particular amount of caffeine always varies based upon the manufacturer company and the other ingredients used while making your favorite hot chocolate drink.

General Thumb rule, the dark chocolate drinks typically contain more caffeine. Hence, the drinks made out of dark chocolates have high caffeine consistency than beverages made of milk chocolates.

Usually, you can have the following amount of caffeine in different types of chocolate products:

Although, hot chocolate contains very few amounts of caffeine, which is very less as compared to other high caffeinated soft drinks. However, if you still want no caffeine at all chocolate-based beverages, then you must go for ready-to-drink chocolate milk.

Related Article: What Is The Half-Life Of Caffeine?

1. What has more caffeine chocolate or coffee?

Typically, coffee has a large amount of caffeine than dark chocolate. As, 8 ounce of a coffee cup contains 95 mg, while an ounce shot of espresso contains 63 mg of caffeine.

2. What chocolate has no caffeine?

3. Can chocolate caffeine keep you awake?

4. How much caffeine is in 100g dark chocolate?

5. Does dark chocolate have side effects?

Eating a large amount of dark chocolate might cause side effects such as: